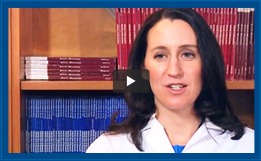 HSS sports medicine surgeon Moira M. McCarthy, MD, who did not treat Barrett, said "for the athletes I've treated, that's a little bit quick, but everybody is different in terms of their recovery."

According to the article, Dr. Kennedy is a Dublin native and is actively involved in basic science investigations at HSS. His goal is to establish HSS as a world leader in ankle cartilage regeneration, and he has been collaborating with numerous international universities to achieve this goal. "The world is getting to be a smaller place. Medical problems are universal but often were approached in a regional manner. International collaboration, sharing knowledge for the common good is truly the only way forward," said Dr. Kennedy.

Dr. McCarthy said the injury of an ACL, which stabilizes the knee joint, is a devastating one for a young athlete because it can take them out of the game for up to a year of post-surgical recovery. She added this injury is most common in athletes engaged in sports that involve frequent starting and stopping, such as soccer and tennis.

Orthopedics This Week featured a study by Moira M. McCarthy, MD, sports medicine surgeon at HSS. The study, Tracking Cumulative Radiation Exposure in Orthopaedic Surgeons and Residents: What Dose Are We Getting, reviewed monthly radiation exposure for 24 orthopedic residents and 16 orthopedic attending surgeons.

According to the study, senior residents rotating on trauma were exposed to the highest monthly radiation compared with all other specialty rotations. Dr. McCarthy, who was a co-author on the study, explained why she became interested in this topic as a resident. "I was using radiation for various uses almost every day.

HSS sports medicine surgeon Moira M. McCarthy, MD, is interviewed by HAN Network during their coverage of the annual Turkey Bowl, a football showdown between the Darien Blue Wave and New Canaan Rams. She discusses injury prevention and how to know when an injury is serious with anchor Kate Czaplinski.

"If you know your sport involves a lot of cutting and pivoting activities, it's really a great idea to get in shape before the season starts to make sure not only are you in shape cardiac-wise but also for the particular sport," said Dr. McCarthy.

In a recent article published by Stamford Daily Voice, Moira M. McCarthy, MD, sports medicine surgeon at HSS, writes on why females are at higher risk for ACL tears and how they can protect against them.

Reporter Chris Tomasson covers the recent injury to Minnesota Vikings’ running back Adrian Peterson. Peterson tore his meniscus after his last game and his timetable to return is unknown.

6 Reasons you Shouldn't Work Out Today

Prevention writer Sharon Liao provides six reasons why someone should not complete a workout, including if he or she is coughing, didn't get enough sleep, has a fever, muscle aches as well as knee or foot pain, and if he or she is fatigued.

How to Identify 10 Common Sports Injuries

MensFitness.com reporter Rachael Schultz writes on how to identify common sports injuries and how to know the difference between when you can walk it off and when you’re at risk for real damage.

5 Signs Your Workout Is Bad For You

Prevention.com explores the difference between typical soreness after exercise and when pain can signal a problem, such as an overuse injury.

Reporter Sharon Liao speaks to Moira M. McCarthy, MD, about how to tell the difference.

Knee Pain? Make Sure Your Meniscus is in Top Shape

In a recent article published in the Darien Daily Voice, Moira M. McCarthy, MD, a sports medicine surgeon at Hospital for Special Surgery, explains meniscus tears and how this injury can occur in individuals of all ages.

Notre Dame linebacker Jaylon Smith reportedly tore both his ACL and MCL in his left knee and required reconstructive surgery. A reporter from South Bend Tribune talks to Moira McCarthy, MD, sports medicine surgeon at Hospital for Special Surgery, for her medical expertise on these types of tears.

A common knee surgery that can sideline athletes for months does not ultimately affect the career length of women invited to the Women’s National Basketball Association (WNBA), according to a new study.

"With appropriate rehabilitation, ACL injuries do not mean an early end to an otherwise promising athletic career," said lead author Dr. Moira McCarthy, an orthopedic surgeon at the Hospital for Special Surgery in New York City.

McCarthy told Reuters Health she was surprised and impressed by just how many women enter the WNBA with a history of knee injury or surgery.